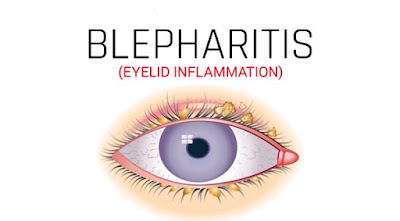 A common inflammation, blepharitis produces a red-rimmed appearance of the margins of the eyelids. In many cases, it’s chronic and bilateral and affects upper and lower lids.

Seborrheic blepharitis is characterized by waxy scales and is common in older adults and in those with red hair.

Staphylococcal (ulcerative) blepharitis is characterized by tiny ulcerated areas along the lid margins.

Both types may coexist.
Blepharitis tends to recur and become chronic. It can be controlled if treatment begins before the onset of ocular involvement.
Causes
Seborrheic blepharitis generally results from seborrhea of the scalp, eyebrows, or ears; ulcerative blepharitis results from Staphylococcus aureus infection. (People with this infection may also tend to develop chalazions and styes.)
Signs and symptoms
Signs and symptoms of blepharitis include itching, burning, foreign-body sensation, and sticky, crusted eyelids on waking. This constant irritation results in unconscious rubbing of the eyes (causing reddened rims) or continual blinking. Other signs include waxy scales in seborrheic blepharitis; flaky scales on lashes, loss of lashes, and ulcerated areas on lid margins in ulcerative blepharitis.
Diagnosis
With blepharitis, diagnosis depends on the patient history and characteristic symptoms. With ulcerative blepharitis, a culture of the ulcerated lid margin shows S. aureus.

Treatment
Early treatment is essential to prevent recurrence or complications. In addition to warm compresses, treatment depends on which type of blepharitis the patient has.
Seborrheic blepharitis: Eyelashes may be shampooed daily (using a mild shampoo on a damp applicator stick or a washcloth) to remove scales from the lid margins; also, the scalp and eyebrows should be frequently shampooed.
Ulcerative blepharitis: Warm compresses may be applied and an appropriate antibiotic, such as erythromycin or bacitracin, may be used at bedtime; additionally, a combination antibiotic and steroid, such as prednisolone may be used; inflammation of the conjunctiva or cornea may be treated orally with tetracycline or doxycycline.
Blepharitis resulting from pediculosis: Nits should be removed (with forceps) or ophthalmic physostigmine or other insecticidal ointment may be applied. (This may cause pupil constriction and, possibly, headache, conjunctival irritation, and blurred vision from the film of ointment on the cornea.)
Posted by Ibrahim Hossain at 12:48 PM