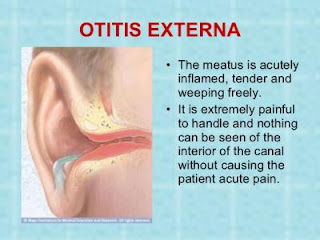 Also known as external otitis and swimmer’s ear, otitis externa is an inflammation of the skin of the external ear canal and auricle. It may be acute or chronic, and it’s most common in the summer. With treatment, acute otitis externa usually subsides within 7 days (although it may become chronic) and tends to recur.

Causes
Otitis externa usually results from bacterial infection with an organism, such as Pseudomonas, Proteus vulgaris, streptococci, or Staphylococcus aureus; sometimes it stems from a fungus, such as Aspergillus niger or Candida albicans (fungal otitis externa is most common in the tropics). Occasionally, chronic otitis externa results from dermatologic conditions, such as seborrhea or psoriasis.

Predisposing factors include:
Signs and symptoms
Acute otitis externa characteristically produces moderate to severe pain that’s exacerbated by manipulation of the auricle or tragus, clenching of the teeth, opening of the mouth, or chewing. Other signs and symptoms include fever, foul-smelling aural discharge, regional cellulitis, and partial hearing loss.

Fungal otitis externa may be asymptomatic, although A. niger produces a black or gray blotting paper–like growth in the ear canal.

With chronic otitis externa, pruritus replaces pain, which may lead to scaling and skin thickening with a resultant narrowing of the lumen. An aural discharge may also occur. Asteatosis (lack of cerumen) is common.

Treatment
Treatment varies, depending on the type of otitis externa.

Acute otitis externa
To relieve the pain of acute otitis externa, treatment includes heat therapy to the periauricular region (heat lamp; hot, damp compresses; heating pad), aspirin or acetaminophen, and codeine. Instillation of antibiotic eardrops (with or without hydrocortisone) follows cleaning of the ear and removal of debris. If fever persists or regional cellulitis develops, a systemic antibiotic is necessary.

Fungal otitis externa
As with other forms of this disorder, fungal otitis externa necessitates careful cleaning of the ear. Application of a keratolytic or 2% salicylic acid in cream containing nystatin may help treat otitis externa resulting from candidal organisms.
Instillation of slightly acidic eardrops creates an unfavorable environment in the ear canal for most fungi as well as Pseudomonas.

Posted by Ibrahim Hossain at 10:06 AM

Email ThisBlogThis!Share to TwitterShare to FacebookShare to Pinterest
Labels: ENT