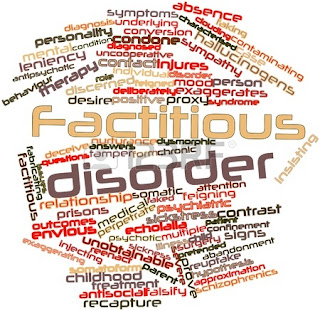 Definition.
A disorder characterized by the conscious production of signs and symptoms of both medical and mental disorders. The main objective is to assume the sick role and eventually hospitalization. Usually diagnosed with physical or psychological symptoms or both.

Called Factitious Disorder By Proxy if the signs and symptoms are faked for another person, as in
mother and child.
Etiology.
Seen more commonly in men and in hospital and health care workers. As children, many of the patients suffered abuse that resulted in frequent hospitalizations, thus their need to assume the sick role.
Physical and Psychiatric Presenting Symptoms.
• May have a gridiron abdomen from the multiple surgeries
• Typically demand treatment when in the hospital
• If tests return negative, they tend to accuse doctors and threaten litigation.
• Become angry when confronted.
Treatment.
Usually involves management rather than cure. Must be aware of counter-transference when the physician suspects factitious disorder.
Differential Diagnosis.
Psychiatric:
Factitious disorder should be distinguished from somatic symptom disorder (formerly called somatization disorder), in which the patient is truly experiencing the symptoms and has no intention to deceive.

In conversion disorder (previously called hysteria), a neurological deficit appears with no organic cause. The patient, again, is truly experiencing the symptoms and signs and has no intention to deceive.