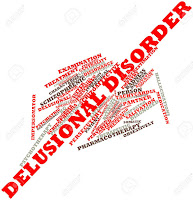 According to the Diagnostic and Statistical Manual of Mental Disorders, 4th edition – Text Revision. (DSM-IV-TR), delusional disorders are marked by nonbizarre false beliefs with a plausible basis in reality. Formerly referred to as paranoid disorders, delusional disorders involve erotomanic, grandiose, jealous, somatic, or persecutory themes. Some patients experience several types of delusions, whereas others experience unspecified delusions with no dominant theme.

Delusional disorders commonly begin in middle or late adulthood, usually between the ages of 40 and 55, but they can occur at a younger age. These uncommon illnesses affect less than 1% of the population; the incidence is about equal in men and women.
Typically chronic, these disorders commonly interfere with social and marital relationships but seldom impair intellectual or occupational functioning significantly.

Causes
Delusional disorders of later life strongly suggest a hereditary predisposition. At least one study has linked the development of delusional disorders to inferiority feelings in the family.
Some researchers suggest that delusional disorders are the product of specific early childhood experiences with an authoritarian family structure. Others hold that anyone with a sensitive personality is particularly vulnerable to developing a delusional disorder.
Certain medical conditions—head injury, chronic alcoholism, and deafness—and aging are known to increase the risk for delusional disorders. Predisposing factors linked to aging include isolation, lack of stimulating interpersonal relationships, physical illness, and impaired hearing and vision.
Severe stress (such as a move to a foreign country) may also precipitate a delusional disorder.

Signs and symptoms
Aside from behavior related to the patient’s delusions, the psychiatric history of a delusional patient may be unremarkable. This helps distinguish it from disorders that result in behavior more dissociated from reality such as paranoid schizophrenia.
The delusional patient is likely to report problems with social and marital relationships, including depression or sexual dysfunction. He may describe a life marked by social isolation or hostility. He may deny feeling lonely, relentlessly criticizing, or placing unreasonable demands on others.
Gathering accurate information from a delusional patient may prove difficult. He may deny his feelings, disregard the circumstances that led to his hospitalization, and refuse treatment.
However, his responses and behavior during the assessment interview provide clues that can help to identify his disorder. Family members may confirm observations—for example, by reporting that the patient is chronically jealous or suspicious.

Assessment clue: Communication
The patient’s ability to communicate can be another indicator. He may be evasive or reluctant to answer questions. Or he may be overly talkative, explaining events in great detail and emphasizing what he has achieved, prominent people he knows, or places he has traveled.
The patient may make statements that at first seem logical but later prove irrelevant. Some of his answers may be contradictory, jumbled, or irrational.
A delusional patient may make expressions of denial, projection, and rationalization. Once delusions become firmly entrenched, the patient will no longer seek to justify his beliefs. However, if he’s still struggling to maintain his delusional defenses, he may make statements that reveal his condition such as “People at work won’t talk to me because I’m smarter than they are.”
Accusatory statements are also characteristic of the delusional patient. Pervasive delusional themes (for example, grandiose or persecutory) may become apparent.
The patient may also display nonverbal cues, such as excessive vigilance or obvious apprehension on entering the room. During questions, he may listen intently, reacting defensively to imagined slights or insults. He may sit at the edge of his seat or fold his arms as if to shield himself. If he carries papers or money, he may clutch them firmly.
Diagnosis
The DSM-IV-TR describes a characteristic set of behaviors that mark the patient with delusional disorder.
In addition, blood and urine tests, psychological tests, and neurologic evaluation can rule out organic causes of the delusions, such as amphetamine-induced psychoses and Alzheimer’s disease. Endocrine function tests rule out hyperadrenalism, pernicious anemia, and thyroid disorders such as “myxedema madness.”

Treatment
Effective treatment of delusional disorders, consisting of a combination of drug therapy and psychotherapy, must correct the behavior and mood disturbances that result from the patient’s mistaken belief system. Treatment may also include mobilizing a support system for the isolated elderly patient.
Antipsychotic drug therapy
Drug treatment with antipsychotic agents is similar to that used in schizophrenic disorders. Antipsychotics appear to work by blocking postsynaptic dopamine receptors. These drugs reduce the incidence of psychotic symptoms, such as hallucinations and delusions, and relieve anxiety and agitation.
Other psychiatric drugs, such as antidepressants and anxiolytics, may be prescribed to control associated symptoms.
High-potency antipsychotics include fluphenazine, haloperidol, thiothixene, and trifluoperazine. Loxapine, molindone, and perphenazine are intermediate in potency, and chlorpromazine and thioridazine are low-potency agents.
Haloperidol, fluphenazine, and fluphenazine are depot formulations that are implanted I.M. They release the drug gradually over a 30-day period, improving compliance.
Clozapine, which differs chemically from other antipsychotic drugs, may be prescribed for severely ill patients who fail to respond to standard treatment. This agent effectively controls a wider range of psychotic symptoms without the usual adverse effects.
However, clozapine can cause drowsiness, sedation, excessive salivation, tachycardia, dizziness, and seizures as well as agranulocytosis, a potentially fatal blood disorder characterized by a low white blood cell count and pronounced neutropenia.
Routine blood monitoring is essential to detect the estimated 1% to 2% of all patients taking clozapine who develop agranulocytosis. If caught in the early stages, this disorder is reversible.
Posted by Ibrahim Hossain at 4:08 PM