Croup or Viral Laryngotracheobronchitis in Children 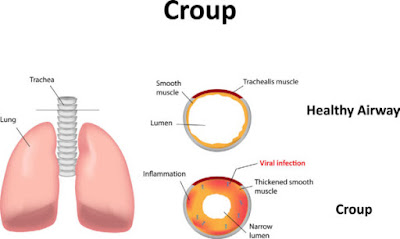 Definition
Croup or viral laryngotracheobronchitis is an acute inflammation of the entire airway, mainly in the glottis and subglottic area, resulting in airway narrowing, obstruction, and voice loss.

Therefore, it has generally been described as a triad of
Epidemiology
Typically, the condition affects younger children (6–36 months), with a peak incidence at 2 years of age. It is the most common cause of acute upper airway obstruction in young children; a reported 3% of children experience it before 6 years of age.
Seasonal outbreaks have been described in the fall and winter, although it may occur year round in some areas.
Males are more often affected than females.

Etiology and Pathophysiology
Viral infection is the predominant etiology; parainfluenza (types 1, 2, and 3) is the most common agent. Other common viral agents are respiratory syncytial virus (RSV) and influenza. Less commonly encountered viruses include adenovirus, rhinovirus, enterovirus, and measles virus.
Mycoplasma pneumoniae is one of the few bacterial microorganisms that has been reported as an etiologic agent.
In children, the larynx is very narrow and is comprised by the rigid ring of the cricoid cartilage; therefore, a viral infection causing inflammation of this area leads to airway edema and subsequent obstruction. This obstruction results in the classic symptoms of stridor and cough.
Clinical Presentation
Diagnosis
The diagnosis is clinical.
Radiography of the neck is not necessary but may show the typical “steeple sign” or subglottic narrowing. Radiographic appearance does not correlate with disease severity.
Radiographs should be obtained if there is concern about the diagnosis, and they may distinguish croup from other causes of upper airway obstruction such as epiglottitis.
Oxygen saturations and arterial blood gases should be obtained if hypoxemia, which may be indicated by restlessness, altered mental status, and cyanosis, is a concern.

Differential Diagnosis
The differential diagnosis includes
Treatment
A few clinical scoring systems that guide assessment and management have been described in the literature.

In general, management of patients without signs of severe airway narrowing or stridor at rest may be managed on an outpatient basis after appropriate observation. Parents should be reassured and instructed about signs of worsening respiratory distress.
Management strategies include use of cool-mist vaporizer, avoidance of cold air exposure when riding in a motor vehicle, and use of steam inhalation, although these methods are anecdotal and have not proved beneficial during several studies.
General supportive measures such as increased fluid intake, decreased handling, and careful observation are usually recommended.
For children with evidence of stridor at rest and/or signs of moderate to severe airway compromise, pharmacologic therapy is beneficial.
Nebulized racemic epinephrine acts by reducing vascular permeability of the airway epithelium; therefore, diminishing airway edema and improving airway caliber by decreasing resistance to airflow.
It should be administered at doses of 0.25–0.5 mL along with humidified oxygen as needed. If no response is elicited after the first treatment, the dose may be repeated.
The patient may return to pretreatment state 30–60 minutes after a dose, and therefore they should be observed for at least 2 hours.
Systemic corticosteroids are effective in reducing symptoms within 6 hours and for at least 12 hours after initial treatment.
Dexamethasone 0.6 mg/kg/dose IM, IV, PO is the glucocorticoid most commonly used, but prednisolone 1–2 mg/kg/dose PO has also been described.
Studies comparing nebulized corticosteroids and systemic corticosteroids have proven the nebulized agents to be inferior.
Posted by Ibrahim Hossain at 4:40 PM