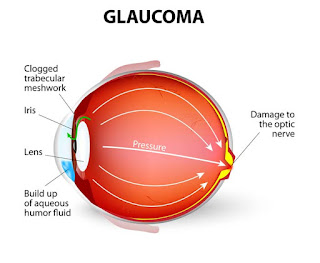 Glaucoma is a group of disorders characterized by intraocular pressure (IOP) high enough to damage the optic nerve. If untreated, it leads to gradual peripheral vision loss and, ultimately, blindness.

Causes
The cause of glaucoma varies according to the type of disorder:
Chronic open-angle glaucoma results from overproduction of aqueous humor or from obstructed outflow of aqueous humor through the trabecular meshwork or the canal of Schlemm. This form of glaucoma frequently runs in families and affects 90% of all patients with glaucoma.
Acute angle-closure (narrow-angle) glaucoma results from obstructed outflow of aqueous humor caused by anatomically narrow angles between the anterior iris and the posterior corneal surface, shallow anterior chambers, a thickened iris that causes angle closure on pupil dilation, or a bulging iris that presses on the trabeculae, closing the angle. Adhesions in the angle, referred to as peripheral anterior synechiae, may be the cause.
Secondary glaucoma can result from uveitis, trauma, or drugs such as steroids. Neovascularization in the angle can result from vein occlusion or diabetes.
Signs and symptoms
Clinical features vary with the form of glaucoma.

Acute angle-closure glaucoma
An ophthalmic emergency, acute angle-closure glaucoma typically has a rapid onset. Symptoms include unilateral inflammation and pain, pressure over the eye, moderate pupil dilation that’s nonreactive to light, a cloudy cornea, blurring and decreased visual acuity, photophobia, and seeing halos around lights.
Because increased IOP may induce nausea and vomiting, glaucoma may be misinterpreted as GI distress. Unless treated promptly, this acute form of glaucoma produces blindness in 3 to 5 days.

Diagnosis
Loss of peripheral visual field, cupping of the optical disk, and increased IOP are the triad of signs that indicate glaucoma. Relevant diagnostic tests include the following:

Posted by Ibrahim Hossain at 2:35 PM