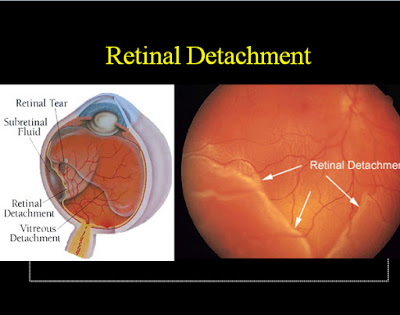 When the sensory retina splits from the retinal pigment epithelium, retinal detachment occurs, creating a subretinal space. This space then fills with fluid, called subretinal fluid. Retinal detachment usually involves only one eye but may involve the other eye later.
Surgical reattachment is often successful. However, the prognosis for good vision depends on the area of the retina that’s been affected.

Causes
Any retinal tear or hole allows the liquid vitreous to seep between the retinal layers, separating the retina from its choroidal blood supply. In adults, retinal detachment usually results from degenerative changes of aging, which cause a spontaneous retinal hole.
Predisposing factors include myopia, cataract surgery, and trauma. Perhaps the influence of trauma explains why retinal detachment is twice as common in males.
Retinal detachment may also result from seepage of fluid into the subretinal space (because of inflammation, tumors, or systemic diseases) or from traction that’s placed on the retina by vitreous bands or membranes (from proliferative diabetic retinopathy, posterior uveitis, or a traumatic intraocular foreign body).
Retinal detachment is rare in children but occasionally can develop as a result of retinopathy of prematurity, tumors (retinoblastomas), or trauma. It can also be inherited, usually in association with myopia.

Signs and symptoms
Initially, the patient may complain of floating spots and recurrent flashes of light. But as detachment progresses, gradual, painless vision loss may be described as a veil, curtain, or cobweb that eliminates a portion of the visual field.

Diagnosis
Ophthalmoscopy after full pupil dilation allows diagnosis. Examination shows the usually transparent retina as gray and opaque; with severe detachment, it reveals folds in the retina and a ballooning out of the area. Indirect ophthalmoscopy is used to search for retinal tears. Ultrasonography is performed if the lens is opaque.

Treatment
Depending on the location and severity of the detachment, treatment may include restriction of eye movements and complete bed rest to prevent further detachment.
A hole in the peripheral retina can be treated with cryothermy; in the posterior portion, with laser therapy. Retinal detachment usually requires scleral buckling to reattach the retina and, possibly, replacement of the vitreous with oil, air, gas, or silicone.
Posted by Ibrahim Hossain at 9:10 AM