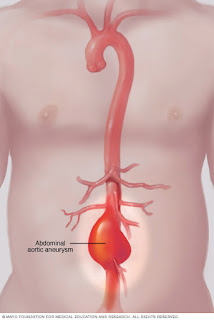 Abdominal aneurysm, an abnormal dilation in the arterial wall generally occurs in the aorta between the renal arteries and iliac branches.

Such aneurysms are four times more common in men than in women and are most prevalent in whites ages 50 to 80. More than 50% of all people with untreated abdominal aneurysms die within 2 years of diagnosis, primarily from rupture of the aneurysm; more than 85%, within 5 years.

Causes
About 95% of abdominal aortic aneurysms result from arteriosclerosis; the rest, from cystic medial necrosis, trauma, syphilis, and other infections. These aneurysms develop slowly.
First, a focal weakness in the muscular layer of the aorta (tunica media), due to degenerative changes, allows the inner layer (tunica intima) and outer layer (tunica adventitia) to stretch outward. Blood pressure within the aorta progressively weakens the vessel walls and enlarges the aneurysm.

Signs and symptoms
Diagnosis
Because an abdominal aneurysm rarely produces symptoms, it’s usually detected accidentally as the result of an X-ray or a routine physical examination. Several tests can confirm suspected abdominal aneurysm:
Treatment
Usually, an abdominal aneurysm requires resection of the aneurysm and replacement of the damaged aortic section with a Dacron graft. If the aneurysm is small and produces no symptoms, surgery may be delayed; however, small aneurysms may rupture. A beta-adrenergic blocker may be administered to decrease the rate of growth of the aneurysm. Regular physical examinations and ultrasound checks are necessary to detect enlargement, which may prestage a rupture.

In asymptomatic patients, surgery is advised when the aneurysm is 5 to 6 cm (2? to 2¼ ?) in diameter. In symptomatic patients, repair is indicated regardless of size. In patients with poor distal runoff, external grafting may be done. (See Endovascular grafting for repair of an abdominal aortic aneurysm.)

Posted by Ibrahim Hossain at 10:06 AM