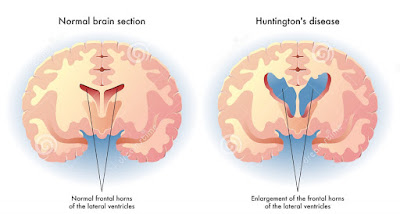 Huntington’s disease usually strikes people between ages 25 and 55 (the average age is 35); however, 2% of cases occur in children, and 5%, as late as age 60. Males and females are equally affected. Death usually results 10 to 15 years after onset from suicide, heart failure, or pneumonia.

Causes
Huntington’s disease is transmitted as an autosomal dominant trait, and either sex can transmit and inherit it. Each child of a parent with this disease has a 50% chance of inheriting it; the child who inherits it can pass it on to his own children.
Because of hereditary transmission, Huntington’s disease is prevalent in areas in which affected families have lived for several generations. Genetic testing is offered to those with a known family history of the disease.
Signs and symptoms
The onset of this disease is insidious. The patient eventually becomes totally dependent—emotionally and physically—through loss of musculoskeletal control.
Neurologic manifestations
Gradually, the patient develops progressively severe choreic movements. Such movements are rapid, usually violent, and purposeless. Initially, they’re unilateral and more prominent in the face and arms than in the legs, progressing from mild fidgeting to grimacing, tongue smacking, dysarthria (indistinct speech), athetoid movements (slow, twisting muscle contractions, especially of the hands) related to emotional state, and torticollis (neck muscle contractions).
Bradykinesia (slow movements) is commonly accompanied by rigidity. Muscle strength is generally maintained. The combination of chorea, bradykinesia, and normal muscle strength results in impairment of both voluntary and involuntary movement.
Another neurologic manifestation is dysphagia, which is seen in a large percentage of patients in the advanced stages. Dysarthria generally presents early in the disease process and may be complicated by perseveration (persistent repetition of a reply), oral apraxia (difficulty coordinating movement of the mouth), and aprosody (inability to accurately reproduce or interpret the tone of language).
Cognitive manifestations
Dementia is an early indication of the disease and is subcortical in nature. Unlike patients with Alzheimer’s disease, patients with Huntington’s disease have no significant impairment of immediate memory. When problems with recent memory occur, they may be due to retrieval rather than encoding problems. Comprehension of information is preserved. Because the disease primarily affects the frontal lobes, deficits of executive function (planning, organizing, regulating, and programming) are common. Impulse control is also impaired, whereas insight into loss of cognitive function is retained.
Psychiatric manifestations
Psychiatric symptoms may precede movement alteration by several years. Depression is the earliest symptom. Other common personality changes include irritability, lability, impulsiveness, and aggressive behavior. Depression may also have a manic component. Psychosis and obsessive-compulsive behavior aren’t common.
Diagnosis
Huntington’s disease can be detected by positron emission tomography and deoxyribonucleic acid analysis. The diagnosis is based on a characteristic clinical history: progressive chorea and dementia, onset of the disorder early in middle age (ages 35 to 40), and confirmation of a genetic link.
A computed tomography scan and magnetic resonance imaging demonstrate brain atrophy. Molecular genetics may detect the gene for Huntington’s disease in people at risk while they’re still asymptomatic.
Treatment
Because Huntington’s disease has no known cure, treatment is supportive, protective, and aimed at relieving symptoms. Tranquilizers as well as chlorpromazine, haloperidol, and imipramine help control choreic movements, but they can’t stop mental deterioration. They also alleviate discomfort and depression, making the patient easier to manage. However, tranquilizers increase patient rigidity.
To control choreic movements without rigidity, choline may be prescribed. A newer treatment for dystonia that’s currently in use in selected patients is injection of botulinum anitoxin directly into the affected muscle. Institutionalization is usually necessary because of mental deterioration.

Posted by Ibrahim Hossain at 9:48 AM