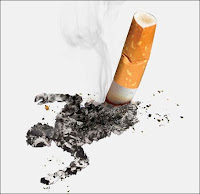 Introduction:
Tobacco was first introduced into European society by Hernandez de Toledo in the sixteenth century. Cigarette smoking is a major preventable cause of disease worldwide.Tobacco addiction, the second-leading cause of death in the world, is a culprit for approximately 5 million deaths each year or 1 in 10 adult deaths.

Nicotine meets the criteria of a highly addictive drug. Nicotine is a potent psychoactive drug that induces euphoria, serves as a reinforcer of its use, and leads to nicotine withdrawal syndrome when it is absent. As an addictive drug, nicotine has 2 very potent issues: it is a stimulant and it is also a depressant.Nicotine in cigarette smoke affects mood and performance and is the source of addiction to tobacco.

Clinical Presentation
Nicotine addiction is classified as nicotine use disorder according to the Diagnostic and Statistical Manual of Mental Disorders, Fourth Edition, Text Revision (DSM-IV-TR). The criteria for this diagnosis include any 3 of the following within a 1-year time span:
Nicotine withdrawal is classified as a nicotine-induced disorder according to the DSM-IV-TR. Symptoms include difficulty concentrating, nervousness, headaches, weight gain due to increased appetite, decreased heart rate, insomnia, irritability, and depression. These symptoms peak in the first few days but eventually disappear within a month.
Symptoms of nicotine toxicity, otherwise known as acute nicotine poisoning, include nausea, vomiting, salivation, pallor, abdominal pain, diarrhea, and cold sweat.
A previous history of depression, use of antidepressants in the past, and onset of depression during previous quit attempts should be obtained.

Management
Smoking may begin as a voluntary habit, but eventually it becomes an addiction. Health professionals can contribute powerfully to motivate their patients to attempt and sustain cessation by offering encouragement, advice, and assistance.

Educate patients about the benefits of smoking cessation and the cessation process. Provide a description of the expected withdrawal syndrome. Continue with a discussion of the possible cessation methods, which include counseling, nicotine replacement, antidepressant medications, behavioral training, group therapy, hypnosis, and quitting “cold turkey.”

(1) reducing either general withdrawal symptoms, thus allowing people to learn without cigarettes, (2) reducing the reinforcing effects of tobacco-delivered nicotine, and
(3) providing some psychological effects on mood and attention states.

Transdermal nicotine patches
Nicotine patches deliver nicotine through the skin at a relatively steady rate.Relapse is common and expected in the early stages of tobacco cessation treatment.

Acute dosing forms
The amount and timing of these products can be titrated by the user, thus allowing the use of NRT medications as rescue medication for cravings. Ongoing craving in a quitter is associated with acute episodes of more intense craving called breakthrough craving.

Consultations
Patients may be referred for group therapy or behavioral counseling. If an affective disorder is suspected, evaluation by a psychiatrist may be indicated.

Follow up
Long-term follow-up is recommended because individuals who successfully quit smoking are at high risk for relapse. The health care deliverer should make provisions for support, measurement of progress, and a mechanism to deal with relapse. For motivated patients who have failed smoking cessation, consider referral to an expert for the treatment of a relapse.
Posted by Ibrahim Hossain at 4:02 PM