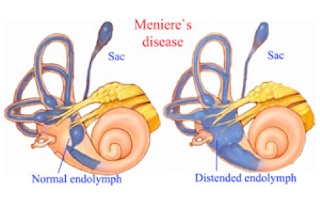 Incidence:
It usually affects adults, slightly more men than women, between ages 30 and 60. After multiple attacks over several years, this disorder leads to residual tinnitus and hearing loss.
Causes
Ménière’s disease may result from overproduction or decreased absorption of endolymph, which causes endolymphatic hydrops or endolymphatic hypertension, with consequent degeneration of the vestibular and cochlear hair cells.
This condition may stem from autonomic nervous system dysfunction that produces a temporary constriction of blood vessels supplying the inner ear. In some women, premenstrual edema may precipitate attacks of Ménière’s disease.

Signs and symptoms
Ménière’s disease produces three characteristic effects:
Fullness or blocked feeling in the ear is also quite common. Violent paroxysmal attacks last from 10 minutes to several hours. During an acute attack, other signs and symptoms include severe nausea, vomiting, sweating, giddiness, and nystagmus. Also, vertigo may cause loss of balance and falling to the affected side.
To lessen these signs and symptoms, the patient may assume a characteristic posture—lying on the unaffected ear and looking in the direction of the affected ear. Initially, the patient may be asymptomatic between attacks, except for residual tinnitus that worsens during an attack.
Diagnosis
The presence of all three typical symptoms suggests Ménière’s disease.
Audiometric studies indicate a sensorineural hearing loss and loss of discrimination and recruitment. Electronystagmography, electrocochleography, a computed tomography scan, magnetic resonance imaging, and X-rays of the internal meatus may be necessary for differential diagnosis.
Treatment
In patients with Ménière’s disease, treatment with atropine may stop an attack in 20 to 30 minutes. Epinephrine or diphenhydramine may be necessary in a severe attack; dimenhydrinate, meclizine, diphenhydramine, or diazepam may be effective in a milder attack.
Long-term management includes use of a diuretic or vasodilator and restricted sodium intake (less than 2 g/day). Avoiding foods with high sugar content is also helpful. A prophylactic antihistamine or a mild sedative (phenobarbital, diazepam) may also be helpful.

If Ménière’s disease persists after 2 years of treatment, produces incapacitating vertigo, or resists medical management, surgery may be necessary. Destruction of the affected labyrinth permanently relieves symptoms but at the expense of irreversible hearing loss.

Systemic streptomycin is reserved for patients in whom the disease is bilateral and no other treatment can be considered.
Special considerations
If the patient is in the facility during an attack of Ménière’s disease:
Before surgery:
If the patient is vomiting, record fluid intake and output and characteristics of vomitus. Administer an antiemetic, as necessary, and give small amounts of fluid frequently.
After surgery:
Record intake and output carefully.
Tell the patient to expect dizziness and nausea for 1 to 2 days after surgery.
Give a prophylactic antibiotic and antiemetic as required.
Posted by Ibrahim Hossain at 7:47 AM

Email ThisBlogThis!Share to TwitterShare to FacebookShare to Pinterest
Labels: ENT