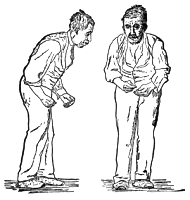 Parkinson disease is recognized as one of the most common neurologic disorders, affecting approximately 1% of individuals older than 60 years.

Pathology
No specific, standard criteria exist for the neuropathologic diagnosis of Parkinson disease, as the specificity and sensitivity of its characteristic findings have not been clearly established. However, the following are the 2 major neuropathologic findings in Parkinson disease:
Loss of pigmented dopaminergic neurons of the substantia nigra pars compacta
The presence of Lewy bodies and Lewy neurites

The loss of dopamine neurons occurs most prominently in the ventral lateral substantia nigra. Approximately 60-80% of dopaminergic neurons are lost before the motor signs of Parkinson disease emerge.

Causes
Most people with Parkinson’s disease have idiopathic Parkinson’s disease (having no specific known cause). A small proportion of cases, however, can be attributed to known genetic factors. Other factors have been associated with the risk of developing PD, but no causal relationship has been proven.

Epidemiology
The incidence and prevalence of Parkinson disease increase with age, and the average age of onset is approximately 60 years. Onset in persons younger than 40 years is relatively uncommon. Parkinson disease is about 1.5 times more common in men than in women.

Clinical Presentation
Onset of motor signs in Parkinson disease is typically asymmetric, with the most common initial finding being an asymmetric resting tremor in an upper extremity. Over time, patients notice symptoms related to progressive bradykinesia, rigidity, and gait difficulty. The first affected arm may not swing fully when walking, and the foot on the same side may scrape the floor. Over time, axial posture becomes progressively flexed and strides become shorter.

Diagnosis
Parkinson disease is a clinical diagnosis. No laboratory biomarkers exist for the condition, and findings on routine magnetic resonance imaging (MRI) and computed tomography (CT) scan are unremarkable.

The finding of Lewy bodies in the midbrain on autopsy is usually considered proof that the patient suffered from Parkinson’s disease.

Treatment and ManagementThere is no cure for Parkinson’s disease, but medications, surgery and multidisciplinary management can provide relief from the symptoms.

The goal of medical management of Parkinson disease is to provide control of signs and symptoms for as long as possible while minimizing adverse effects.

Levodopa, coupled with carbidopa, a peripheral decarboxylase inhibitor (PDI), remains the gold standard of symptomatic treatment for Parkinson disease. Carbidopa inhibits the decarboxylation of levodopa to dopamine in the systemic circulation, allowing for greater levodopa distribution into the central nervous system. Levodopa provides the greatest antiparkinsonian benefit for motor signs and symptoms, with the fewest adverse effects in the short term; however, its long-term use is associated with the development of motor fluctuations (“wearing-off”) and dyskinesias.

Anticholinergic agents can be used for patients who have disability due to tremor that is not adequately controlled with dopaminergic medication, but these are not first-line drugs, because of their limited efficacy and the possibility of neuropsychiatric side effects.

Amantadine is an antiviral agent that has antiparkinsonian activity. Its mechanism of action is not fully understood, but amantadine appears to potentiate CNS dopaminergic responses. It may release dopamine and norepinephrine from storage sites and inhibit the reuptake of dopamine and norepinephrine. Amantadine may offer additional benefit in patients experiencing maximal or waning effects from levodopa.

Patient Education
Patients with Parkinson disease should be encouraged to participate in decision making regarding their condition. In addition, individuals and their caregivers should be provided with information that is appropriate for their disease state and expected or ongoing challenges . Psychosocial support and concerns should be addressed and/or referred to a social worker or psychologist as needed.

Prognosis
PD invariably progresses with time. Motor symptoms, if not treated, advance aggressively in the early stages of the disease and more slowly later.

The life expectancy of people with PD is reduced. Mortality ratios are around twice those of unaffected people. Cognitive decline and dementia, old age at onset, a more advanced disease state and presence of swallowing problems are all mortality risk factors. On the other hand a disease pattern mainly characterized by tremor as opposed to rigidity predicts an improved survival.
Posted by Ibrahim Hossain at 6:17 AM