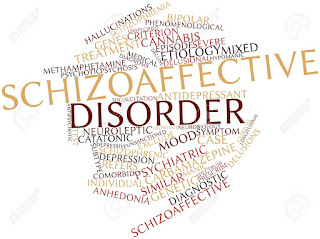 Introduction
Patients who show concurrent symptoms of both mood disorders (bipolar or depressive types) and psychotic disorder are given the diagnosis of schizo-affective disorder. Onset is usually during young adulthood. The chronic symptoms are typically fewer and less severe than among those patients with schizophrenia.
Causes
Schizoaffective disorder may result from a combination of physiologic and psychological causes. The specific cause is unknown.
Signs and symptoms
The patient must show clear symptoms of schizophrenia. During both the active and residual phases of the illness, symptoms of mood disturbance must also occur. These symptoms may not be caused by substance abuse or by a medical condition. Patients may experience difficulty functioning in the workplace. They have a restricted range of social contacts and may also have difficulty performing self-care.
Diagnosis
According to the classification found in the Diagnostic and Statistical Manual of Mental Disorders, 4th edition – Text Revision, a schizoaffective disorder is diagnosed if the patient’s symptoms meet the following criteria:
Schizoaffective disorder can be classified as a specific type:
With the bipolar type, the disturbance includes a manic or a mixed episode, or a manic or a mixed episode plus a major depressive episode.
With the depressive type, the disturbance includes only major depressive episodes.
Treatment
As is indicated by the symptoms, treatment must focus on both psychotic and mood disorders. An antipsychotic is used to control the symptoms of schizophrenia. An antidepressant and an antimanic drug are used for the mood disorder. Psychotherapy can be useful to help the patient understand the nature of the illness and the need for ongoing treatment. Support groups increase socialization and provide safe opportunities to build interpersonal skills. The family should be encouraged to attend a support group to understand the illness better and to learn ways they can be supportive of the patient.
Posted by Ibrahim Hossain at 8:13 AM