West Nile encephalitis, part of a family of vectorborne diseases that also includes malaria, yellow fever, and Lyme disease, is an infectious disease that primarily causes encephalitis (inflammation) of the brain. It’s caused by the West Nile virus (WNV), a flavivirus commonly found in humans, birds, and other vertebrates in Africa, West Asia, and the Middle East. The first documented cases of WNV in the Western Hemisphere didn’t occur until late in August 1999, when numerous dead birds in the New York, New Jersey, and Connecticut region tested positive for WNV after genetic sequencing. Scientists traced the Western Hemisphere origin of the disease to the vicinity of New York’s Bronx Zoo and believe that mosquitoes feeding on diseased birds helped to spread the disease.
In temperate areas, West Nile encephalitis occurs mainly in the late summer or early fall. In southern climates with milder temperatures, West Nile encephalitis can occur year round.
All persons living in endemic areas carry a risk of contracting West Nile encephalitis, but persons older than age 50 or those with compromised immune systems have the greatest risk.
The mortality rate of West Nile encephalitis is measured by case-fatality rates, which range from 3% to 15% (higher in the elderly population). 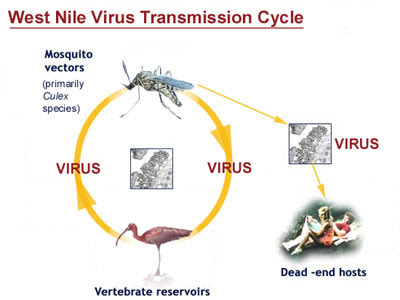 Causes
WNV is transmitted to humans by the bite of an infected mosquito (primarily the Culex species). Mosquitoes become infected by feeding on infected birds.
Ticks infected with WNV have been found in Africa and Asia, but their role in transmission and maintenance of the virus is uncertain; they aren’t considered vectors for WNV in the United States.
The Centers for Disease Control and Prevention has reported that there’s no evidence that a person can contract the virus from handling live or dead infected birds. However, barehanded contact when handling dead animals, including dead birds, should be avoided; if a dead animal must be handled, gloves or other protective measures should be used to dispose of the carcass. A dead bird is a sign that there may be infected mosquitoes in the area; findings should be reported to the nearest Emergency Management Office.
Signs and symptoms
Mild WNV infections are more common than severe infections and include symptoms such as fever, headache, and body aches, often accompanied by swollen lymph glands and a skin rash. Severe infections present with symptoms such as headache, high fever, neck stiffness, stupor, disorientation, coma, tremors, occasional convulsions, paralysis and, rarely, death.
The incubation period for West Nile encephalitis is 5 to 15 days after exposure.
Diagnosis
The immunoglobulin M antibody capture–enzyme-linked immunosorbent assay is the test of choice for rapid definitive diagnosis. It has a high probability of accurate diagnosis of WNV infection when performed with acute serum or cerebrospinal fluid specimens obtained while the patient is hospitalized.
Encephalitis can also be caused by numerous viral and bacterial infections, so data must be carefully examined to determine a definitive diagnosis. St. Louis encephalitis, which is symptomatically similar to West Nile encephalitis, should be considered.
Treatment
No specific therapy is used to treat West Nile encephalitis, and no known cure exists. Treatment is generally aimed at controlling the specific symptoms. Supportive care, such as intravenous fluids, fever control, and respiratory support, is rendered when necessary.
Posted by Ibrahim Hossain at 1:51 PM