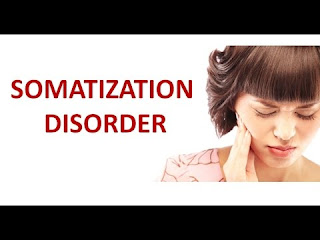 Introduction
When multiple recurrent signs and symptoms of several years’ duration suggest that physical disorders exist without a verifiable disease or pathophysiologic condition to account for them, somatization disorder is present.
The typical patient with somatization disorder usually undergoes repeated medical examinations and diagnostic testing that—unlike the symptoms themselves—can be potentially dangerous or debilitating. However, unlike the hypochondriac, she isn’t preoccupied with the belief that she has a specific disease.
Somatization disorder usually is chronic, with exacerbations during times of stress.
Signs and symptoms usually begin in adolescence; rarely, when the patient is in her 20s. This disorder primarily affects women; it’s seldom diagnosed in men.
Causes
Both genetic and environmental factors contribute to the development of somatization disorder.
Signs and symptoms
A patient with somatization disorder presents physical complaints in a dramatic, vague, or exaggerated way, often as part of a complicated medical history in which many medical diagnoses have been considered.
An important clue to this disorder is a history of multiple medical evaluations by different physicians at different institutions—sometimes simultaneously—without significant findings. The patient usually appears anxious and depressed.
Common physical complaints include:
The patient typically relates her current complaints and previous evaluations in great detail. She may be quite knowledgeable about tests, procedures, and medical jargon.
Attempts to explore areas other than her medical history may cause noticeable anxiety. She tends to disparage previous health care professionals and previous treatments, often with the comment, “Everyone thinks I’m imagining these things.”
Ongoing assessment should focus on new signs or symptoms or any change in old ones to avoid missing a developing physical disorder.
Diagnosis
The Diagnostic and Statistical Manual of Mental Disorders, 4th edition – Text Revision details the characteristics of patients with this condition.
Diagnostic tests rule out physical disorders that cause vague and confusing symptoms, such as hyperparathyroidism, porphyria, multiple sclerosis, and systemic lupus erythematosus. In addition, multiple physical signs and symptoms that appear for the first time late in life usually stem from physical disease, rather than somatization disorder.
Treatment
The goal of treatment is to help the patient learn to live with her signs and symptoms. After diagnostic evaluation has ruled out organic causes, the patient should be told that she has no serious illness currently but will receive care for her genuine distress and ongoing medical attention for her symptoms.
The most important aspect of treatment is a continuing supportive relationship with a health care provider who acknowledges the patient’s signs and symptoms and is willing to help her live with them. The patient should have regularly scheduled appointments to review her complaints and the effectiveness of her coping strategies.
The patient with somatization disorder seldom acknowledges any psychological aspect of her illness and rejects psychiatric treatment.
Special considerations

Posted by Ibrahim Hossain at 9:52 AM