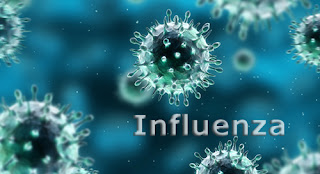 Also called commonly as the flu, influenza is an acute, highly contagious infection of the respiratory tract that results from three types of Myxovirus influenzae. It occurs sporadically or in epidemics (usually during the colder months). Epidemics tend to peak within 2 to 3 weeks after initial cases and subside within 1 month.
Although influenza affects all age-groups, its incidence is highest in schoolchildren. Its severity is greatest in the very young, the elderly, and those with chronic disease. In these groups, influenza may even lead to death.

Causes
Transmission of influenza occurs through inhalation of a respiratory droplet from an infected person or by indirect contact such as using a contaminated drinking glass. The virus then invades the epithelium of the respiratory tract, causing inflammation and desquamation.
One remarkable feature of the influenza virus is its capacity for antigenic variation. Such variation leads to infection by strains of the virus to which little or no immunologic resistance is present in the population at risk. Antigenic variation is characterized as antigenic drift (minor changes that occur yearly or every few years) and antigenic shift (major changes that lead to pandemics).

Influenza viruses are classified into three groups:
Type A, the most prevalent, strikes every year, with new serotypes causing epidemics every 3 years.
Type B also strikes annually, but only causes epidemics every 4 to 6 years.
Type C is endemic and causes only sporadic cases.

Signs and symptoms
After an incubation period of 24 to 48 hours, signs and symptoms appear: the sudden onset of chills, a temperature of 101° to 104° F (38.3° to 40° C), headache, malaise, myalgia (particularly in the back and limbs), a nonproductive cough and, occasionally, laryngitis, hoarseness, conjunctivitis, rhinitis, and rhinorrhea.
These signs and symptoms usually subside in 3 to 5 days, but cough and weakness may persist. Fever is usually higher in children than in adults. Also, cervical adenopathy and croup are likely to be associated with influenza in children. In some patients (especially elderly ones), lack of energy and easy fatigability may persist for several weeks.

Complications
Fever that persists longer than 3 to 5 days signals the onset of complications. The most common complication is pneumonia, which can be primary influenza viral pneumonia or secondary to bacterial infection. Influenza may also cause myositis, exacerbation of chronic obstructive pulmonary disease, Reye’s syndrome and, rarely, myocarditis, pericarditis, transverse myelitis, and encephalitis.

Diagnosis
At the beginning of an influenza epidemic, early cases are usually mistaken for other respiratory disorders. Because signs and symptoms aren’t pathognomonic, isolation of M. influenzae through the inoculation of chicken embryos (with nasal secretions from infected patients) is essential at the first sign of an epidemic. Nose and throat cultures and increased serum antibody titers help confirm this diagnosis.
After these measures confirm an influenza epidemic, diagnosis requires only observation of clinical signs and symptoms. Uncomplicated cases show a decreased white blood cell count with an increased lymphocyte count.

Treatment
Uncomplicated influenza is treated with bed rest, adequate fluid intake, aspirin or acetaminophen (in children) to relieve fever and muscle pain, and guaifenesin or another expectorant to relieve nonproductive coughing. Prophylactic antibiotics aren’t recommended because they have no effect on the influenza virus.
Amantadine and rimantadine (antiviral drugs) have proven effective in reducing the duration of signs and symptoms in influenza A infection. The neuramidase inhibitors zamivir and oseltamivir are available for influenza A and B. If influenza is complicated by pneumonia, supportive care (fluid and electrolyte supplements, oxygen, and assisted ventilation) and treatment of bacterial superinfection with appropriate antibiotics are necessary. No specific therapy exists for cardiac, central nervous system, or other complications.

Posted by Ibrahim Hossain at 12:27 PM