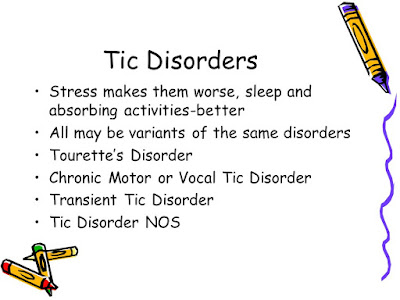 Introduction
Including Tourette syndrome, chronic motor or vocal tic disorder, and transient tic disorder, tic disorders are similar pathophysiologically but differ in severity and prognosis. All tic disorders, commonly known simply as tics, are involuntary, spasmodic, recurrent, and purposeless motor movements or vocalizations. These disorders are classified as motor or vocal and as simple or complex.
Tics may begin as early as age 2, with average onset being age 7. All tic disorders are three times more common in boys than in girls. Transient tics usually are self-limiting, but Tourette syndrome follows a chronic course with remissions and exacerbations.
Causes
Although their exact cause is unknown, tic disorders occur more frequently in certain families, suggesting a genetic cause. Tics commonly develop when a child experiences overwhelming anxiety, usually associated with normal maturation. Tics may be precipitated or exacerbated by the use of phenothiazines or central nervous system stimulants or by head trauma.
Signs and symptoms
Assessment findings vary according to the type of tic disorder.

Inspection, coupled with the patient’s history, may reveal the specific motor or vocal patterns that characterize the tic, as well as the frequency, complexity, and precipitating factors. The patient or his family may report that the tics occur sporadically many times a day.
Note whether certain situations exacerbate the tics. All tic disorders may be exacerbated by stress, and they usually diminish markedly during sleep. The patient also may report that they occur during activities that require concentration, such as reading or sewing.
Determine whether the patient can control the tics. Most patients can, with conscious effort, control them for short periods.
Psychosocial assessment may reveal underlying stressful factors, such as problems with social adjustment, lack of self-esteem, and depression.
Treatment

Posted by Ibrahim Hossain at 9:21 AM